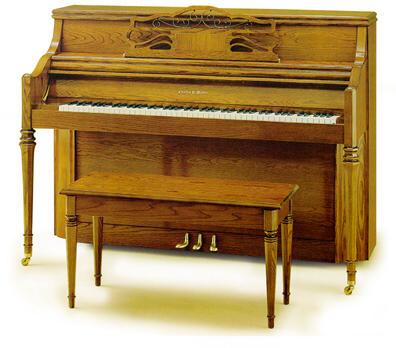 The Charles R. Walter furniture console pianos are actually compared with other studio pianos. Because they have studio sized actions, long keys and very long strings. The piano in the inside is the same as the studio only smaller because of cabinet designs and smaller casters. The piano is even rated as a studio piano in the Piano Book. Thus allowing you to have a beautiful furniture case without any sacrafice of quality.

Graceful swirls of antique brass embellish the handsome music desk of this model which faithfully reflects the Spanish influence in furniture design. Available in Oak.

The Charles Walter piano is a relatively new instrument in the world of pianos, with the company beginning in 1975 with the introduction of a 43" upright. The company prides itself on quality instruments, and produces mostly consoles and mid-sized grands that are manufactured in the USA and inspected personally by a Walter family member. The piano company remains in the hands of the Walter family, and its factory is located in Indiana.